At UltrAspire, our close interaction with athletes in our community yield stunning and inspiring stories. We believe in the power of positivity and community support and as such we want to bring you these stories as we receive them as a means to promote and support these incredible athletes.

At 4:30 in the morning, Nolan Blanco wakes up and runs. “My neighborhood block is just about 400 meters,” Blanco explains. “I can go out and do a quick 5k.” Blanco runs at dawn several times throughout the week, while balancing his full-time job and spending time with his daughters when they stay with him.

An aspiring ultrarunner, Blanco’s first opportunity to compete in an ultramarathon was at the 2017 North Face Endurance Challenge. A little over 33 miles in, Blanco’s body began working against him as his legs fought his movement. Despite Blanco’s protest, a race official stopped him, marking him as ‘DNF,’ a racer that did not finish. The official did not realize that even though Blanco was in pain, he knew how to run with it.

Blanco was diagnosed with generalized dystonia in 2014. Generalized dystonia is a neurological movement disorder that causes groups of muscles throughout the body to cramp and painfully contract. Its symptoms can manifest in different ways and range in intensity. When Blanco’s symptoms began around 2008, he realized that he was losing control of his right hand. “I noticed it first when I couldn’t hold a drumstick the way I was taught to hold it,” Blanco revealed. An accomplished percussion instructor, Blanco’s beginning symptoms quickly impacted his hobbies and profession, leading him to a dark place in life.

Blanco soon took action and sought medical treatment, but even neurologists struggled with diagnosing him. The lack of answers and solutions were weighing on him; Blanco wanted to know what was happening and how to fix it. “I figured that if the doctors weren’t able to find anything, I would try to find the answer myself.”

Dystonia is the third most common movement disorder in the United States, impacting an estimated 250,000 Americans. However, it is frequently misdiagnosed and under-researched. As he researched online, Blanco was met with dismal feedback: “When you start going down the rabbit-hole of Google, it can be a pretty devastating thing,” Blanco noted. “I didn’t necessarily know what I was looking for– all I knew was that I was searching my symptoms.”

In 2014, an occupational therapist Blanco had been seeing for his inability to write recommended a nearby neurologist. Upon visiting, Blanco underwent another round of physical tests he had taken before in past examinations, including a painful EMG test. After deliberation, the neurologist introduced Blanco to a colleague that was familiar with dystonia. Once she learned of the symptoms Blanco had been experiencing for six years, she was certain it was the disorder that other doctors had not recognized previously.

You are welcome here,

But you will run beside me,

You don’t run my life.

The overwhelming majority of dystonia cases are not fatal. Though it can be incredibly debilitating and vary in severity from person to person, some dystonic individuals are able to adapt to their symptoms and carry on. Overtime, Blanco has endured leg spasms and temporary loss of control of them. Still, he has not lost his ability to run, something he does not take for granted: “Running took on a whole new meaning because as I started learning more about dystonia and seeing the other cases that are out there… I felt it [was] right that since my case is not as severe as many of them out there, I might as well use what I got. If it works, I’m gonna run.”

One of Blanco’s obstacles as a dystonic runner is the cramping pain that causes his legs to lock up. Describing his discomfort, he recounted that “For a couple of years, it was every day. I was just in constant pain.” Blanco does not resent the pain though. “I had to make friends with dystonia but even more so, I had to make friends with the pain.” His relationship with dystonia has also allowed him to personify the pain as being separate from himself. “The pain can run with me: it can run in front of me or behind me, but it’s going to stay over there while I stay right here.” While observing health-dictated limits, he does not let his diagnosis affect his mindset.

Movement is a friend,

Through highs and lows movement shines,

Blanco strives to one day run 50 miles. With the help and motivation of his coach, Joanna Harris, he has been able to develop a training plan accustomed to his dystonic symptoms. Using her experience as a Certified Strength and Conditioning Specialist, Harris aids Blanco in strengthening his legs and nullifying the pain he deals with. “[We work on] a lot of isolations of the left and right leg.”  Blanco also has recently acquired his Ultrarunning Coach certification from United Endurance Sports Coaching Academy. His certification has been a key role in developing a training plan that works for him and fits his goal. A few weeks prior to being interviewed, Blanco began focusing on his maximum oxygen rate used in exercising and incorporating running intervals, tempo runs, and recovery runs into his regime.

Blanco’s adaptation to life with dystonia has been a long but redemptive journey. Apart from the ultra-endurance he has found that living with dystonia has made him a better parent to his two daughters, Lyra and Kyla. Teaching them to not give up has manifested in the ways they approach obstacles, like schoolwork. From enjoying sunrises he has witnessed during his morning runs, Blanco was also able to rediscover his passion for creative writing. The haikus featured in this article are all works he wrote about his love for running and progress with dystonia. As long as Blanco continues to find running fun, there are no signs of him stopping. “I don’t want to use dystonia as an excuse not to be able to run fifty miles. I can’t live with myself for not trying.” 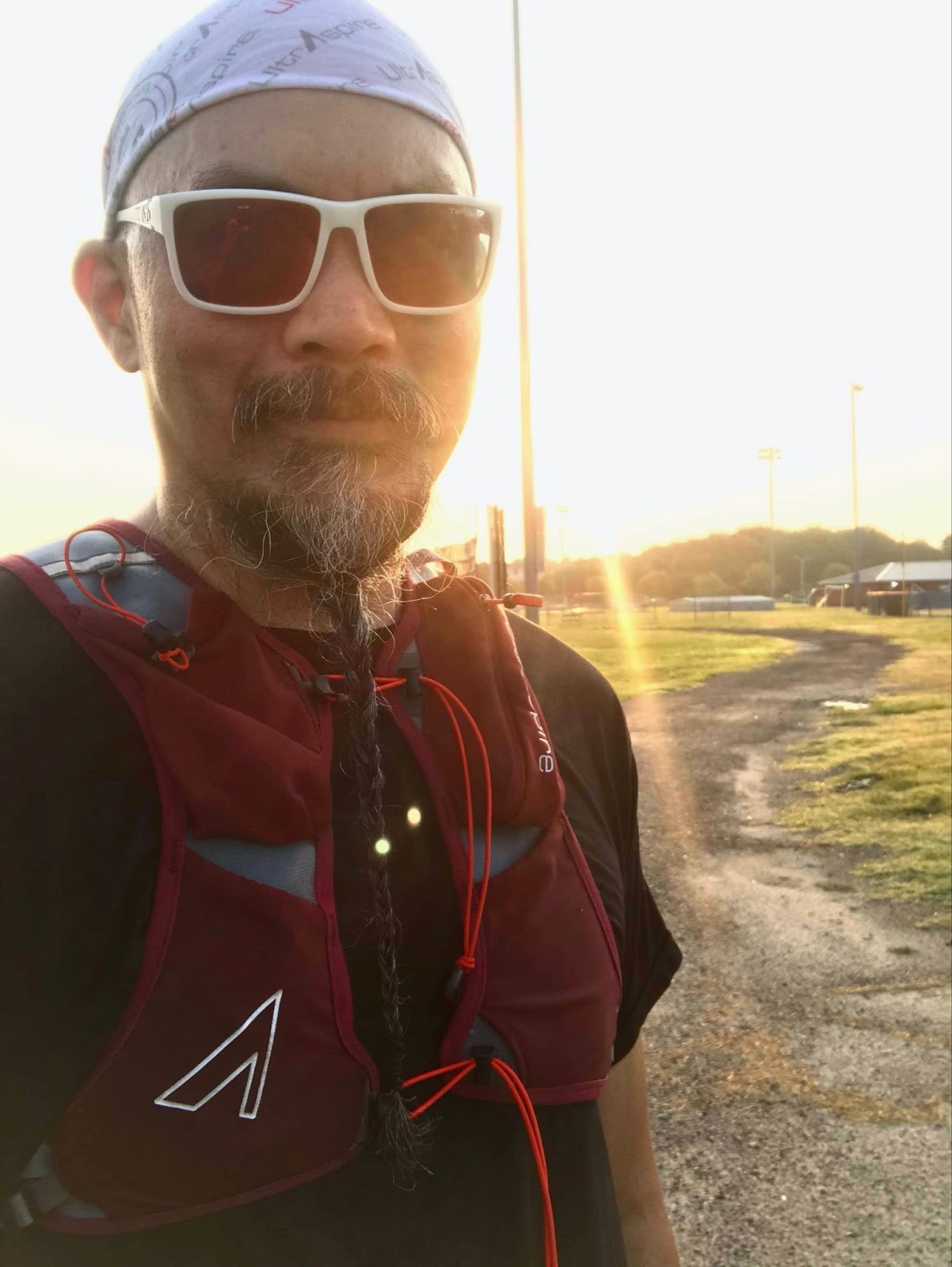 The journey of the Ultra-Athlete begins with desire, a compelling need to go beyond the last point of return…and then some…and more…and so on, and so on…

In a world with the possibility of endless power and potential – You supply the Aspiration, we’ll supply the water bottles, running belts, running vests, and triathlon gear to keep the perspiration flowing.